Roberto was a friend to all. His selfless generosity and special talent enriched thousands of lives throughout Cuyahoga County and Northeast Ohio. Primarily a pianist, he was proficient on eight instruments, from woodwinds to percussion and keyboards. His musical career began in the mid-60’s. A self-taught musician, by the age of ten he was playing out. His musical training began at the Cleveland Music Settlement and New York City’s Third Street Music Settlement before heading to Boston’s Berklee College of Music to be schooled in arranging and composing. Returning to Cleveland, he recorded, taught, and played in local bands, which later led to performing throughout the United States with various musical groups. His ten-piece orchestra, Roberto Ocasio’s Latin Jazz Project, grew rapidly in popularity with five consecutive years’ nominations as one of the five best jazz bands in northern Ohio and twice awarded the FREE TIMES Magazine Music Award. The group’s CD, “Algo Para Ti,” was released in 2001. All of the compositions are written, arranged, and produced by Roberto. 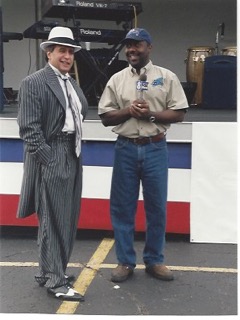 Roberto opened for or shared the stage with national artists while maintaining a heavy performing schedule, and teaching and strenuously promoting knowledge of the music and its roots—taking his talents to schools, universities, and community programs. Highly regarded by his profession and community for his outstanding service, Roberto was named “1997 Outstanding Musician and Community Leader” and “2001 Hispanic of the Year.”

Roberto’s tragic passing in 2004 brought the community together as he had in life. The outpouring of support was a reflection of his tremendous positive impact on the community. He had played and led his ensembles in more than 250 performances throughout the area during the last year of his life, and there were countless requests to keep his music and teachings alive. Roberto’s band continued on with original and new musicians led by Directors Rolando Pizana, Nate Haskell, and Eric Dregne and Manager, Bev Montie. Numerous posthumous recognitions included rededication of the family’s neighborhood street in Ohio City as Roberto Ocasio Avenue, and The Roberto Ocasio Foundation was established. Among those close to Roberto accepting the challenge of keeping the music alive was his longtime friend and colleague, Bobby Sanabria, now the Foundation’s Honorary Trustee/Advisor and Artistic Director/Artist-In-Residence. Roberto and Bobby met as students at Berklee College of Music in the 70’s, the only two Latinos enrolled at the school. Their personal history is now honored by Bobby’s intense dedication and commitment to The Foundation and its work, preserving and passing on this incredible music, and its story of historical sacrifices and struggles, to the next generations.

The Roberto Ocasio Mural
The 8ft x 25 ft mural was created in 2004 by CSU art students and local artists to honor the life, music, and heritage of Roberto Ocasio. The mural was originally installed for public view on September 23, 2005, in the Cleveland State University Music & Communications Building Lobby to commemorate Hispanic Heritage Month.  It will be relocated in the near future to a new public location TBD.